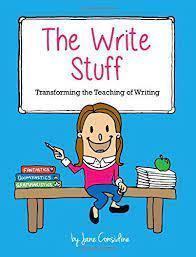 In English, we have successfully rolled out the Jane Considine program – ‘The Write Stuff.’  The program has transformed the way we teach writing, providing a step-by-step framework to convert children into successful writers with an abundance of new vocabulary, grammar and techniques of writing.

"The Write Stuff" by Jane Considine to bring clarity to the mechanics of writing.  "The Write Stuff" follows a method called "Sentence Stacking" which refers to the fact that sentences are stacked together chronologically and organised to engage children with short, intensive moments of learning that they can then immediately apply to their own writing.  An individual lesson is based on a sentence model, broken in to 3 learning chunks. Each learning chunk has three sections:

1. Initiate section – a stimulus to capture the children’s imagination and set up a sentence.

3. Enable section – the children write their sentence, following the model.

Children are challenged to ‘Deepen the Moment’ which requires them to independently draw upon previously learnt skills and apply them to their writing during that chunk.

The three zones of writing :-

Unfortunately not the ones with chocolate chips.

Some cookies are necessary in order to make this website function correctly. These are set by default and whilst you can block or delete them by changing your browser settings, some functionality such as being able to log in to the website will not work if you do this. The necessary cookies set on this website are as follows:

Cookies that are not necessary to make the website work, but which enable additional functionality, can also be set. By default these cookies are disabled, but you can choose to enable them below: